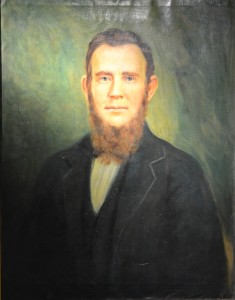 Born on March 27, 1829, William Stevenson Doak grew up in Tusculum, TN near Tusculum Academy.  William Stevenson studied under his father Samuel W. and prepared for college. Doak graduated from Tusculum College in 1851 and then took theological courses at Cincinnati and Danville.  The Presbytery of Cincinnati licensed him to preach in 1853.  He spent his early ministry in Kentucky and Tennessee where he preached at Timber Ridge, Greeneville, Oakland and several other churches.  In addition to his ministerial duties, Doak worked as a physician in Kentucky for several years.  He became president of Tusculum College in 1865 and held the position until the 1868 merger with Greeneville College.  Doak continued as president over Greeneville and Tusculum College from 1868 to 1882.  In addition to his presidential duties, Doak taught Philosophy and Political Science.  He became the superintendent of Public Instruction for Tennessee from 1881-1882.  He married Fannie E. Barton on July 18, 1855 and fathered seven children, including Julia Doak Taber, the first woman to attend and graduate from Tusculum College.  Doak died on May 23, 1882.