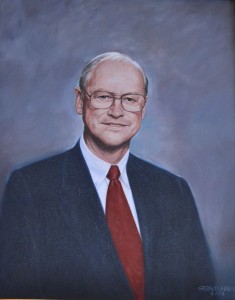 Thomas Garland grew up in Kingsport and Oak Ridge, Tenn.  He earned his degree from East Tennessee State University and served in the U.S. Air Force.  After his military service, he began his career in banking and served on the Boards for several East Tennessee banks.  Garland represented residents of East Tennessee in the Tennessee Senate for twenty-one years. He also led many legislative and governmental study groups.  From 1985 to 1990, he served as Chancellor and CEO of the Tennessee Board of Regents.  Garland’s community involvement includes serving on several corporate, charitable and civic boards and commissions.  Garland has long been a member of the Tusculum College Board.  Due to his many activities, Garland has earned honors and awards from East Tennessee State University and Tusculum College.  From Tusculum College, Garland received a Honorary Doctor of Law degree, the Distinguished Service Award, and our library is named after him.