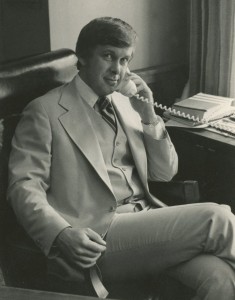 Thomas Voss grew up in Racine, Wis.  He earned his B.A. from St. Francis College, his M.A. from Marquette University and his Ph.D. from the University of Wisconsin at Madison.  He married Jane C. Cempura and fathered five children.  Prior to arriving at Tusculum, Voss worked as the Assistant Professor of American and English Literature, had been a Fulbright Professor of American Studies at the University of Trondheim in Norway, and co-edited a six volume edition of The Letters of William Cullen Bryant that was supported and published by a NEH grant.  He learned of Tusculum College while working at the Catholic University of America.  President Cothran had met Voss in Norway and knew his credentials.  In 1970, Voss became the first Roman Catholic to be Dean of Faculty at Tusculum College.  When Cothran left, Voss assumed the role of CEO in addition to his responsibilities as Dean.  He never applied to be President, but the Board offered him the position in 1972.  Once he assumed the presidency, Voss undertook restoration of relations with 150 students that had sworn off Tusculum College.  Due to his efforts fifty of the 150 students returned to Tusculum.  Voss also raised nearly $5 million dollars during his term as president.  He left to become President of Morris Harvey College.  Upon leaving Tusculum College, Voss and his wife received honorary degrees.