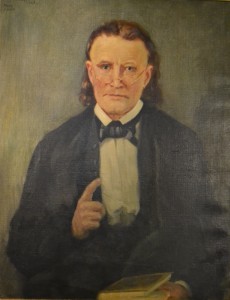 Samuel W. Doak grew up in Limestone near Washington College Academy.  He graduated from Washington College in 1806 and the Abington Presbytery licensed him to preach on October 10, 1807.  Doak worked under the Presbytery of Philadelphia from 1809 to 1813. While there, he taught school for young men and women before moving back to Tennessee.  Doak began to preach at Mt. Bethel and Providence Churches in 1813.  He became pastor of these churches in 1820 and served Mt. Bethel for 31 years. He served Washington College as Vice President for several years.  In 1818, he assisted his father with founding Tusculum Academy and taught here until 1864. With his father’s passing in 1829, Doak spent a year recovering from the loss of his father and business partner and building a new home. (Doak’s 1830 home operates as a museum to Samuel W. Doak’s family today and welcomes the public during normal business hours.)  Samuel W. Doak resumed his teaching and presidency at Tusculum Academy in 1831. By 1841, Doak attracted approximately 75 students to the Academy.  Many students wanted to continue their education beyond the basics, and Doak obtained a charter to open Tusculum College in 1841.  Doak then solicited donations to build the first college building, known today as the President Andrew Johnson Museum and Library or “Old College.”  He and his wife Sarah are laid to rest at Mt. Bethel Cemetery in Greeneville.