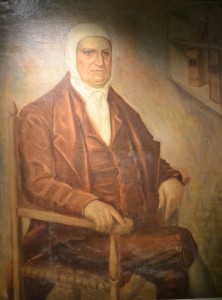 Doak, the son of Irish immigrants Samuel and Jane Doak, grew up in Augusta County, Va.  He entered the College of New Jersey, now Princeton College, in 1773 and graduated in 1775 with a degree in Theology.  He married Ester H. Montgomery of Virginia with whom he had six children. After Ester’s death on July 3, 1807, he remarried Margaret McEwen of Nashville. The Hanover Presbytery licensed him to preach on October 31, 1777.  In 1780, he moved to Salem, Tenn. and began organizing churches and schools.  Doak obtained a charter for Martin Academy, now Washington College Academy, in 1784 and re-chartered the school as Washington College in 1795.  He served as President of Washington College Academy until 1818 when he moved to Tusculum.  At Tusculum, he founded Tusculum Academy with his son Samuel W. Doak.  Samuel Doak died on December 12, 1829 and lies at Salem Churchyard, near Washington College Academy in Limestone.