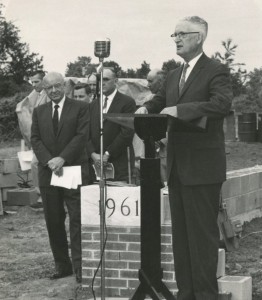 Raymond Rankin grew up in Tusculum.  His parents, Tusculum graduates, raised their family near the college and his father worked for Tusculum College.  Raymond attended Tusculum’s Preparatory Department.  He then studied music at Tusculum College and graduated in 1914.  After Tusculum, Rankin studied theology at McCormick Seminary in Chicago.  He received his D.D. from Tusculum College in 1927.  Rankin assumed a pastorate in Montana before leaving to perform Y.M.C.A. war work at Camp Grant, Ill.  After Camp Grant, he worked as an Assistant Minister at the First Presbyterian Church in Wichita, Kan.S until 1927.  He later pastored at the First Presbyterian Church in Detroit and became a Board member at Tusculum College.

The Board of Trustees asked Rankin to fill the presidency for one year provided that a merger with King College, Washington College Academy and Tusculum College occurred. The merger never took place, but Rankin stayed on as President.  Rankin spent his first two years building financial resources, improving Tusculum’s credit rating, eliminating debt, gaining supporters, and restoring relations with the Presbyterian Church.  Rankin proposed having women represented on the Board and introduced a rotation system for Trustees.  Rankin improved student enrollment, oversaw integration, increased the number of foreign students, improved the financial standing of the college, increased the library’s holdings, and saw the construction of Katherine Hall and Annie H. Byrd Fine Arts Building.