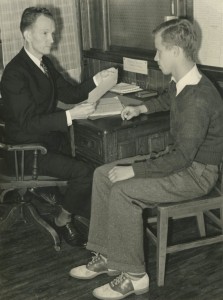 Leslie Patton received his M.A. from Emory College and his Ph.D. from Columbia.  After graduating from Columbia, Patton served in the U.S.O. until 1945.  Shortly after leaving the U.S.O., Patton became Dean at Tusculum College and earned the respect of faculty, staff and students.  When President Davies resigned, the Board asked Patton to fill the presidency.  American colleges at the time suffered from rising debts and decreased enrollment due to the Korean War.  Sadly, Tusculum was not immune to this national trend despite Patton’s best efforts.  After his presidency, Patton became Vice President and Dean of Tusculum College.