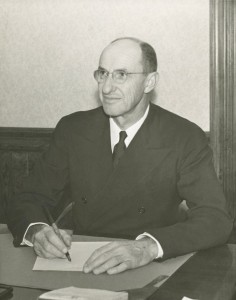 John McSween grew up in Timmonsville, S.C. and graduated from Davidson College in 1903.  Following his graduation, he became an active businessman in his hometown. McSween graduated from Theological Seminary at Columbia, S.C. in 1913.  He became ordained in 1913 and pastored in Dillion, S.C., Rowland, N.C., Clemson University, Anderson and Chester, S.C.  McSween served as an Army chaplain on the Mexican border and in France from 1917 to 1919.  He completed graduate work at the University of South Carolina and at Biblical Seminary in New York, where he earned his D.D. in 1930.  Presbytery College in Clinton, SC hired McSween to fill the role of President from 1928 to1935.  When McSween took over the presidency at Tusculum College, he found the college on good financial grounds and many students leaving to join the military.  (Pearl Harbor had been bombed six months earlier, and many students felt a calling to join the military.)  McSween encouraged students to stay and even asked professors to talk with students about completing their college education before joining the military.  McSween retired due to health reasons in December 1944.