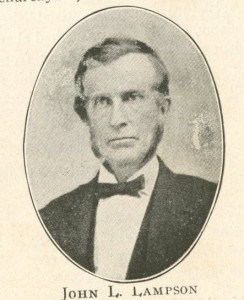 Born on August 13, 1824, Lampson grew up in Grand Isle, Vt.  He graduated from the University of Vermont with a M.A. degree and moved south in 1850.  He supervised McMinn Academy in Rogersville, Tenn. for several years and served as Acting President of Greeneville College from 1859-1860.  After his presidency, he became a merchant and an elder in the Second Presbyterian Church in Jonesboro, TN.  Lampson died on April 20, 1877.