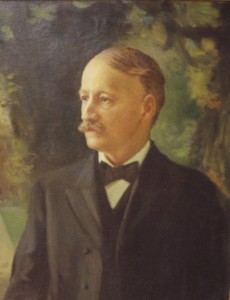 Jeremiah Moore, born on November 25, 1845, grew up near Tusculum. He attended Tusculum Academy and then graduated from Tusculum College in 1871.  Moore became Class President while a student at Tusculum College.  He studied theology at Lane Seminary.  The Holston Presbytery ordained him in September 1874 and he began to preach at Amity, Timber Ridge, Oakland and Mount Bethel churches in Greene County.  Moore became President of Tusculum College in May 1883 and held this position until May 1901.  In addition to his presidential duties, Moore taught Philosophy and Political Science at Tusculum College.  His father, Anthony Moore, served on the Board of Trustees before and during his presidency.  As president, he restored relations with his brother who had sided with the Confederacy and moved west.  Moore’s nieces attended Tusculum College and lived with him during their college years. Moore left the presidency to preach in eastern Kentucky for five years.  He then went to preach in Missouri for two years and later in New Mexico for seven years.  Moore closed a pastorate of four years at Clovis, N.M. on June 30, 1916.  He married Isabel Rankin Mathes on December 10, 1874.