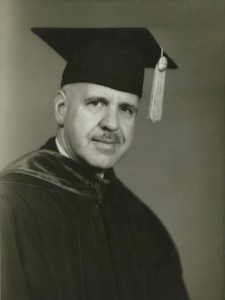 George Davies graduated from Princeton in 1922 and from McCormick Seminary in 1925.  He served churches in Nebraska, Iowa and Pennsylvania.  In 1942, he received his Ph.D. from the University of Pittsburg.  He became the first Tusculum College president to hold a Ph.D.  Davies had served as a Navy chaplain in 1943 and spent two years on Kwajalein in the Marshall Islands.  His naval career culminated with the rank of Lieutenant-Commander.  A month after being discharged, he assumed the presidential duties of Tusculum College and was formally inaugurated on October 19, 1946.  His presidency constantly experienced grand achievements and tremendous setbacks.  Davies’s presidency gave Tusculum College tenure, a retirement system and free tuition for the children of faculty.