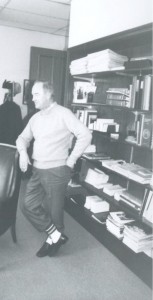 Earl Mezoff originated from Pennsylvania and graduated from Thiel College in Greenville, Penn. with a B.A.  He earned a M.A. in Psychology from Michigan State University and completed his D.Ed. in Higher Education from Pennsylvania State University.  He joined the navy and served in the Pacific Theater during WWII.  Mezoff married Joan Miller and had two daughters.  After the Navy, he held positions in counseling and industrial relations at the University of Pittsburgh and at GM.  Mezoff worked at Thiel College as Director of Admissions and held other positions before leaving.  He assumed a position as Assistant to the President and Vice President at Lebanon Valley College in 1963 before moving to Nebraska.  In Nebraska, he became president of Dana College.  He helped unite Danish and German factions surrounding Dana College and eased town-gown conflicts between Dana College and the surrounding community.  He received the Cross of the Knight Order of Dannebrog in 1976 from Queen Margrethe II of Denmark.  Mezoff was nominated to the Danish Court, studied the Danish education system and established a relationship with the University of Copenhagen.  Mezoff promoted exchange student programs while at Dana College.

When Mezoff arrived at Tusculum College, he found problems with morale, neglected buildings, eliminated academic programs, lack of financial support and a “party school” reputation.  He developed programs to attract non-traditional students and adults, started the Tusculum Tomorrow Campaign, paid off much of Tusculum’s debt, renovated the science labs, installed computer systems that benefitted all of campus, and received a challenge grant that put Tusculum College on better financial standing.  At the end of his presidency, Mezoff had lost the confidence of the faculty, staff and students by not delegating authority and responsibilities. Faculty frustrations encouraged the Board to replace Mezoff.  Despite the lack of confidence, SACS was enthused about Tusculum and several graduate programs accepted many of Tusculum’s graduates.