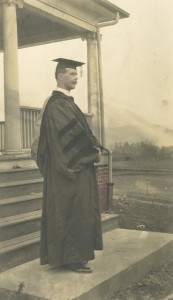 Charles Gray began life on June 3, 1867 in Heuveton, N.Y.  He graduated in 1890 from Hamilton College in New York.  He then attended from Union Theological Seminary in New York City and graduated in 1894.  He earned his M.A. degree at Hamilton College in 1895 and completed post-graduate work at Columbia University and New York University.  He married Florence Irene Rollins of Yonkers, N.Y. in June 6, 1893 and had three sons.  Gray became ordained to the Presbyterian ministry in 1893 and pastored at First Church in Smithtown Branch, N.Y. from 1894 to 1903.  In 1903, he moved to Marshall, NC to preach at Oakland Heights Church in Asheville, N.C. from 1907 to 1908.  He received his D.D. from Hamilton College in 1908 and his L.L.D. from Tusculum College in 1920.  Gray served on the Education Committee in the Holston Presbytery and learned of Tusculum College.  He became Greeneville and Tusculum’s President in 1908 and oversaw the merger with Washington College and the dissolution of the merger. Gray played a pivotal role in increasing the endowment, enrollment, pay rates and achieved SACS accreditation.  Gray participated in the Religious Education Association, Southern Sociological Congress, Delta Kappa Epsilon, Phi Beta Kappa, Sons of the American Revolution, Tennessee Historical Society and the American Association for the Advancement of Science.  He retired from the presidency in 1931 and continued to fundraise for Tusculum College until his death in 1936.