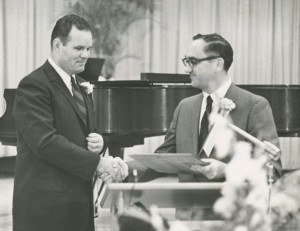 Charles Ping earned his B.D. from Louisville Seminary and his Ph.D. in Philosophy from Duke.  He assumed the role of Dean at Tusculum College in 1966 and worked as a minister at area churches.  In Trout’s resignation letter, he recommended Ping to be President of Tusculum College.  Ping served one year as president before resigning his presidency at Tusculum College.