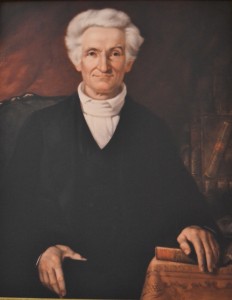 Born on August 15, 1775, Charles Coffin grew up in Newburyport, Mass. Coffin attended Harvard College to study medicine. He changed his studies to focus on ministry and graduated in 1793.  Coffin’s father, a medical doctor, recommended that he move to a healthier climate. Coffin took his father’s advice and moved south. The Essex Middle Association licensed him to preach on May 14, 1799, and he began preaching in Norfolk, Va. He came to Greeneville College in 1800, where he began to teach and fill the role of Vice President.  As Vice President, he traveled frequently to New England to procure funds, books and supplies for the fledgling college.  He married Susan Woodbridge Ayers on April 19, 1802.  He received his D.D. from Williams College in 1808 with Hezekiah Balch.  At the death of Hezekiah Balch, Coffin assumed the role of President until 1827.  He resigned to take the Presidency of Blount College in Knoxville, now The University of Tennessee, Knoxville.  He served Blount College for six years, and then returned to Greeneville. Coffin served as Chairman of the Board and interim President from 1840 –1843.  He served Greeneville College as an invaluable Trustee until his death on June 3, 1853.