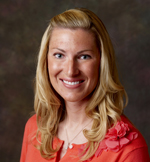 Julie Huebner is the head softball coach at Tusculum College. Huebner will assist in all aspects of the program while also serving as the Pioneers’ pitching coach.

Huebner joins the Pioneers after serving as an assistant coach at East Stroudsburg University in East Stroudsburg, Pa. During her three seasons with the Warriors, Huebner served as the pitching coach while mentoring the outfielders in the defensive aspects of the game.

Huebner earned her bachelor’s degree from Indiana University of Pennsylvania in 2006, graduating with honors after majoring in Hospitality Management with a minor in Psychology. She was an outfielder and two-year captain on the softball team during her time at IUP, while earning All-PSAC West Second Team honors in 2005.

The Indiana University of Pennsylvania graduate began her coaching career as an assistant at North Penn High School in Lansdale, Pa., serving one year on the Knights’ coaching staff prior to her appointment at East Stroudsburg. Her coaching experience also includes three years at the NFCA Pennsbury Recruiting Camp, as well as four years as a lead instructor at the IUP overnight summer camps. Huebner also served as the tournament site manager for the NSA World Series Qualifier held at IUP.