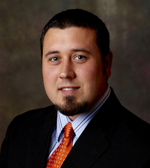 Michael Hawkins was promoted to the position of Associate Athletic Trainer in 2008.

Hawkins came to Tusculum from Troy University, where he served as a graduate assistant athletic trainer since 2004. While at the Troy, Ala. school, he worked primarily with the Trojans’ football while assisting with the evaluation, treatment, rehabilitation and documentation of athletic injuries as well as administrative responsibilities. While at Troy, he also assisted physicians from the Alabama Sports Medicine and Orthopaedic Center and team physician in a weekly clinic for the community and the university.

As an undergraduate at Appalachian State University in Boone, N.C., he served as an athletic training student and assisted with men’s soccer, baseball, track & field, wrestling and football.

He is a member of the National Athletic Trainers Association (NATA), is a licensed athletic trainer in the State of Tennessee and is an approved clinical instructor. He is also certified instructor by the American Red Cross in CPR and AED, NATA BOC certified and is an American Cancer Society Fresh Start Facilitator.

Hawkins completed his Masters of Science degree in Sport and Fitness Management from Troy in December of 2005. He is also a 2003 Appalachian State graduate, where he earned his Bachelor of Science degree in Athletic Training. While at ASU, he was a member of the Dean’s List (2001-03) and was the four-time recipient of the Murphy Medical Scholarship.

Hawkins is married to the former Summer Green of Murphy, N.C.  They are the proud parents of one daughter, Cora Wade, 3, and son Adler Von, 2.  Michael is an accomplished drummer with the alternative hard rock bands, “The Xiphoid Process” and “Planet Hofmann”