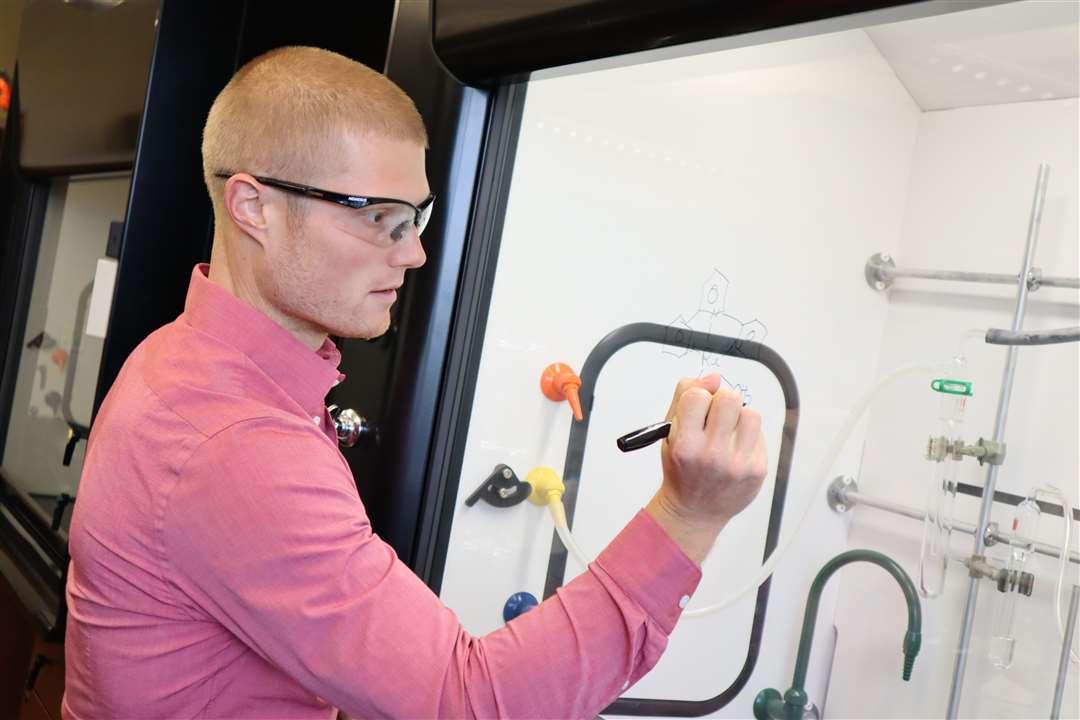 Dr. Dennis Ashford graduate Summa Cum Lauda in 2010 from Northern Kentucky university with a Bachelor of Science degree in Chemistry. During his time at NKU, Dr. Ashford worked under the guidance of Prof. KC Russell on the synthesis, characterization, and bioactivity of 18-crown-6 pyridoannulenes for use as biomarkers. Following his B.S. degree, he then received his Ph.D. in Inorganic Chemistry from the University of North Carolina at Chapel Hill as a Department of Energy Office of Science Graduate Fellow working under Professors Thomas J. Meyer and Joseph L. Templeton. His Ph.D. focused on dye sensitized photoelectrosynthesis cells (DSPECs) which can be used to mimic natural photosynthesis and harvest sunlight to generate fuels. His dissertation was titled “A Molecular Solution to Solar Fuels” and has published over 30 peer-reviewed articles in the field of artificial photosynthesis.

Following his Ph.D. work, Dr. Ashford then went to work at Eastman Chemical Company as first an Advanced Research Chemist and then a Senior Research Chemist. During his time at Eastman, he focused on studying the interfacial characterizations between thin film electrons and biological solutions. He joined the Tusculum University faculty in 2017 as an Assistant Professor of Chemistry and has since helped build a vibrant and strong undergraduate research program in chemistry receiving funding from the likes of the East Tennessee Foundation, the Arthur Vining Davis Foundations, and the Eastman Foundation. In his free time Dennis enjoys experiencing all the natural beauty East Tennessee has to offer, including white water kayaking and mountain biking.

The Ashford Research group has two major projects. The first involves the development of new materials for harvesting solar energy. In particular, dye-sensitized photoelectrosynthesis cells (DSPECs) utilize sunlight to split water into its constituent components of molecular oxygen (O2), 4 protons (H+), and 4 electrons (e–). The protons and electrons are then combined to generate hydrogen gas that can then be utilized in hydrogen fuel cells (see figure below. 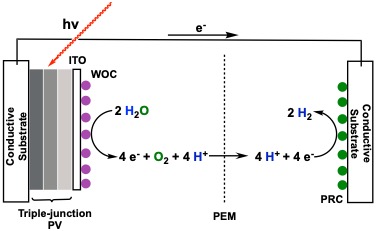 Although stoichiometrically simple, the process of combining 4 protons and 4 electrons to generate hydrogen is mechanistically challenging, and requires several proton-coupled electron transfer (PCET) steps. Undergraduate researchers at Tusculum University are working to design novel molecular catalyst that can achieve the hydrogen evolution reaction at high rates, while still be synthetically and economically viable. These catalysts could then be incorporated into a DSPEC to general useable fuels from sunlight.

Almost 2 million new cases of cancer are discovered in the United States every year. Nearly half of all chemotherapeutics administered today are derived from the platinum-based drug family platins. However, despite over 40 years of research and clinical use, these cytotoxic agents still have major drawbacks. Patients often experience severe side-effects and renal complications to platins and other chemotherapeutics due to their lack of specificity for cancerous cells over healthy ones.

Undergraduate researchers at Tusculum University are working to design new, highly selective anti-cancer pro-drugs that utilize light to activate in the tumorous region of the body. These new pro-drugs are called photodynamic chemotherapeutics which upon illumination with a light source, activate to initiate cellular apoptosis, or cell death (see figure below). The advantage these pro-drugs have over traditional chemotherapeutics is that they are only cytotoxic after illumination, so the primary care provider can “turn on” the drug through direct and site-specific irradiation, potentially limiting the damage of genetic material outside of the tumorous area and decrease the side-effects significantly.