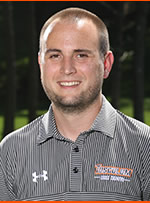 Cory Pratt is entering his fifth season as the Pioneers cross country coach, a post he assumed in 2013.  Along with his duties guiding the Tusculum cross country program, he will be assisting with the Pioneer track & field program which will begin NCAA Division II competition during the 2017-2018 academic year.

In 2014, Pratt guided the Pioneer men to second place finishes at the Catawba Invitational and the Lenoir-Rhyne Invitational, while producing a third place effort at the Hyder-McMahill Invitational. In the postseason, the TC men finished 8th in the South Atlantic Conference Championship and returned to compete at the NCAA Southeast Regional. Every member of the team recorded a new career-best time during the season, with six coming at the Greater Louisville Classic. Pratt coached two-time All-Region and All-SAC standout David Cooper, as he earned his third-straight Capital One Academic All-American award.

On the women’s side, Pratt coached the Pioneers to top-10 finishes in all but one regular season meet that they recorded a team score. TC also finished 10th at the SAC Championship and four runners competed in the NCAA Southeast Regional. Four member of the women’s team recorded a new career-best time during the 2014 campaign including sophomore Samantha Vogt, who posted the seventh-fastest 5,000-meter time in Tusculum women’s cross country history at the Royals XC Challenge.

Pratt graduated from Tusculum in May 2011 where he earned his Bachelor’s degree while majoring in sport management.  He earned his Master’s degree from TC this past December in human resource development.

The Morristown, Tenn. native was a wide receiver on the Morristown West High School football team during his prep career.

Cory is married to the former Olivia Rhodes of Morristown and the couple resides in Mosheim, Tenn.  His hobbies and activities include all sports, including running and fishing.